So many experiences in my life do not make sense in my mind, as they relate to this Sacajawea project. I didn’t realize it at first, I just knew I had to write the story. But then, I began to see an uncanny number of circumstances and details spiritually guiding and leading me, even before I could listen to them.

The first one was the day I was born. We lived in Richland, Washington, along the Columbia River where the expedition came through in 1805. For some reason, my parents named me Jane (Janie/Janey — This was the name William Clark gave to Sacajawea because he couldn’t pronounce her name). This would not seem unusual, nor would the fact that our dearest family friends were the Brattons, descendants of Private William Bratton a member of the Corps of Discovery.

The years went by and we moved to many places, but in 1962 we landed in Portland, Oregon. My best friends in high school were Cliff Lewis, John Clark and Jayne Scott (another Jane). We went to Seaside and Cannon Beach (places Sacajawea had been) nearly every weekend. And still, I didn’t think anything about this as it would relate to Sacajawea and her story.

Life went on, many people came in and out of my path who were somehow associated through ancestors with the Lewis and Clark story, the Charbonneaus, Meriwether Lewis.  But in 1987, my husband, kids and I were traveling back to Washington from Indiana and our car broke down in Bozeman, Montana.

Now that would seem like tough luck, but we were trapped there in that picturesque, mountainous setting for three days. While we waited for our car to be repaired something  captured our hearts, and we both realized we were being called to stay. So, we listened, found jobs, bought a house and stayed for three years.

My husband was a teacher and his class was studying Lewis and Clark. One day we took his students on a field trip to Three Forks, Montana (where Sacajawea was brutally kidnapped from her people in about 1800). I never expected to be so overcome with emotion that day. I just walked the rivers and Fort Rock, making sketches of the plants and watching the eagles above me…

The next Saturday, May 20, 1989, I told my husband I had to go back there, I didn’t know why but I needed to go by myself. He was very supportive of me following my heart. That day, I sat on the cliff looking over the rivers, contemplating. I was thinking about Sacajawea, and I couldn’t stop the tears welling up in my eyes — when a gentle voice echoed in my soul, “I want you to write my story.”

Up until this point, I had never put anything together about my life and this woman of history. I started to write the story as a children’s book but soon realized it was not a children’s story. To do her justice and honor her path, we needed to hear the hard things so we could see what she had been through and how she survived.

I didn’t exactly know how to proceed, but in truth, I wasn’t “ready”  to proceed. I put the three chapters away in a box, and in 1990 we moved on to Washington State. It was at this time that I started to walk toward my own Spiritual Awakening. In 1996, I began to open, as never before, to the spirit within me.

In 2003, my daughter, Jerah, was going to film school in California. She said to me, “Mom, you should write that book you started into a screenplay.”

At this time, I started to notice (more than usual), eagles, hawks and ravens flying across my path. There was an eagle that soared over a neighboring field, always landing on a tall evergreen tree — I could see him from my writing desk. And, a hawk flew back and forth in the same field every day. There was something extremely powerful and inspiring about that…

My heart was truly filled to overflowing with this task I was undertaking. I drew a timeline across the wall following the path of the expedition in 1805. Then, based on the Lewis and Clark journals, I taped notecards on the dates Sacajawea was mentioned. It was actually very little — and I had to somehow find the rest of the story buried in the men’s words, the oral tradition of her people and in the Spiritual. 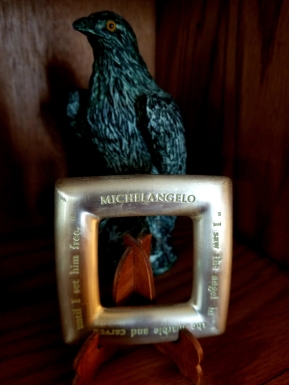 One day I was in Barnes and Noble and came across a paperweight (not be chance). It had a quote engraved around it by Michelangelo, “I saw the angel in the marble and carved until I set him free.” I became emotional right there in the store — it struck me deeply. Within the mass of history about the expedition, the story through her eyes was there, somewhere — I just had to “carve” and set it free.

And, that’s when all the experiences in my life that pointed to this woman, started to take shape in my heart. It was a revelation that Sacajawea was with me, guiding me, moving me to write her story. So, I said to myself and to her, “I know you. I promise to give everything it takes to share you with the world.”

I was determined. It took four years to grasp the essence of her purpose. I had to get out-of-the-way. I had to let go of my inhibitions and stereotypes. I had to get past feeling “unworthy” to tell the story and be willing to write it with all the joys and with all the pain. I may never fully understand all I had to go through or why, but I know it has fully changed me.

There is history. And, there is Spirit. Sometimes telling the story accurately requires opening to a voice from another place, spending “40 days and 40 nights in the wilderness,” and reconciling to the fact that we don’t know everything.

My greatest motivation and care is to protect the story in every way — for it is a dream, a calling, a leading all my life. It has taken great personal sacrifice, yet I have been deeply blessed with the things that matter. I am committed to sharing, not just the literal history that we know, but “who” she was, and how she felt, and the destiny of her precious life.

Sacajawea’s overall message for today is powerful… it is what this world needs to hear. It is time to remember we are all connected to each other and to Mother Earth. We each must open to this “knowing” and believe. We must learn to love and cherish peace.

I may never understand completely why I was called to write the story of this beautiful, Native American woman… and I expect others may not understand either. But, one thing I have learned, “truth” is absolutely not what we think in our minds. We never stop learning, and my spiritual quest continues every day.

Passionate energy and determination embrace Sacajawea’s team as we gather together around this epic production. She continues to call those who will join the journey. The wonders, the mysteries, the miracles, the blessings never stop as we walk toward our purpose, to give Sacajawea a voice. It truly is and always will be our own Journey of Discovery, too!

In gratitude and thanksgiving, 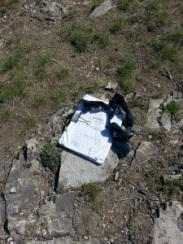 PHOTO: In May 2015, I returned to Three Forks, MT,  at Fort Rock, the exact place where Sacajawea asked me to write her story in May 1989. I placed the script on a rock and told her I have done what she asked and I believe she will honor this Call. Many blessings.

Short Bio – As a writer, my passion is to bring the stories of history to life. I have been writing for more than 30 years, including creative and business writing, website content and blogging. The epic screenplay, Sacajawea, The Windcatcher, is a story that touched me deeply. It required me to change, to get out-of-the-way and awaken. I was humbled when the script was selected and nominated for BEST PERIOD PIECE by the 2013 Action On Film International Film Festival. At this time, I am writing the story into a novel by the same name, to accompany the film’s distribution. It has also been my dream to write stories for children. Therefore, I completed a family-centered spec script entitled, Kimama’s Wings, and a pre-teen chapter book, Crabtree, which is being developed for film. One of my greatest joys was to collaborate with my daughter and granddaughter for the illustrations, and publish the children’s book, The Grass Maiden, Sacajawea, based on my research from the feature film. It was important to create a story to share Sacajawea’s message of love with children. Other projects related to Sacajawea are in development as well as a miniseries based on her son’s life.
~ Jane L. Fitzpatrick