The producers of Sacajawea, The Windcatcher, an International feature film project about the life of Sacajawea, are proud to welcome Jhane Myers, award-winning producer and actor for the character of “Otter Woman.”

Jhane (Comanche/ Blackfeet) has garnered awards as a filmmaker, producer, actor, Native adviser and an artist of traditional jewelry and regalia. ​She was selected as one of the featured fine artists for the first ever Comanche Fine Artist calendar for 2016. She is a noted fourth generation dressmaker, third generation doll maker, beadworker and traditional regalia designer. She has worked in the Smithsonian’s National Museum of the American Indian, D.C and NYC, the Wheelwright Museum, the Indian Craft Shop D.C., the Autry Museum, Comanche Visitors Center and the Blackfeet Heritage Center. She was also a Community Curator to the Smithsonian’s National Museum of the American Indian’s popular exhibition and book “Identity by Design.”

Otter Woman was a significant character in Sacajawea’s story. She was the older Shoshoni wife of Toussaint Charbonneau, the fur trapper who traded a gun for Sacajawea. She did not trust the white men, and she did not want the young mother to go with them.

​“The relationship between Otter Woman and Sacajawea evolved through our story to be more like a mother and daughter. Jhane Myers is perfect for this role. As an Indigenous woman, a mother, who has worked in film for many years through acting and as a liaison for the tribes, she is invaluable to the production and we are so grateful to have her as Otter Woman.”

Jhane made history as the founding executive director of the American Indian National Center for Television and Film. The Institute of American Indian Arts (IAIA) formed the Center in Los Angeles, CA, with network partners Disney/ABC, CBS, NBC/Universal and FOX to increase the representation and visibility of American Indian talent in all aspects of the entertainment industry. She made her acting debut in an indie film called Bare (2015). Continuing in film she enjoyed being an associate producer on the PBS documentary La Donna Harris: Indian 101 (2014).

Hailing from the Penetuckah (sugar eater) and Yaparucah (root eater) bands of the Comanche Nation and Blackfeet American Indians, Jhane is dedicated to authentic Indigenous film producing, Native languages, Native cultural advising, acting and fine art. Jhane is a Sundance/ Time Warner Storyteller Fellow (2018) and Producer Fellow for (2017). She is known for the Comanche linguistics and culture in Monsters of God (2017), and Comanche linguistics in Magnificent 7 (2016). Multitalented and articulate, Jhane brought her cultural sense of self and Native community to public relations engagements for the film, Wind River (2017) and for her work as supervising producer of N. Scott Momaday: Words from a Bear (2019) for the American Masters Series, and as associate producer for the feature documentary, Defending the Fire (2017). Jhane can also be seen on camera in the TV series Native America, New World Rising (2018) and in the Sundance short film Over the Bridge (2016). She has also served as publisher and editor-in-chief of Oklahoma Casinos & Entertainment magazine, a motion picture publicist, directed her own public relations agency, Jhane Myers & Associates, and she has worked as a publicist to Mel Gibson on Apocalypto, which included organizing the premier at The Riverwind Casino in Oklahoma.

The entire production team for the Sacajawea film welcomes Jhane Myers to the project. They believe she will bring vital authenticity to the character of Otter Woman and as a producer on the project, she will also speak to accuracy and the critical Native American elements Sacajawea’s story deserves.

Sacajawea brings a message of Peace. 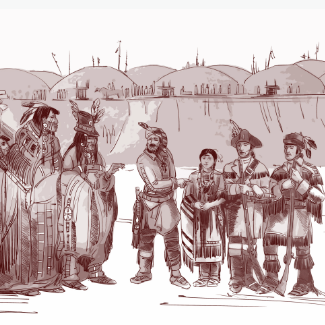